I’m Not At Liberty to Discuss It…

Seriously… I’m afraid you don’t have the necessary clearance to be told much. So I’ll be as thorough as possible without including any potential security risks. Fair enough?

Little is actually known about the top-secret Smart Alec Tees facility, and no photos are believed to exist. But tucked somewhere up in the remote Canadian tundra– two miles beneath the earth’s surface– is a bunker the size of a small city. Air circulation… water treatment… enough food to feed a small army for years. 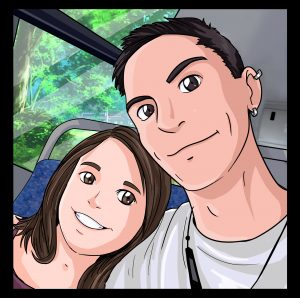 Smart-Ass Tees– which is the true original name of the store– Founder and Chief Engineer, David Potts, can often be spied sitting behind a stack of notes and sketches, obsessively tweaking another new product design. A little to the left… a touch smaller… a bit darker.

“Would you please pass me that whatchamacallit, honey?” He points vaguely towards a small mess of things, and the girl instinctively throws him an oddly shaped mechanical object.

Sydney, his daughter, jumps back up to sit atop her impressive pile of stuffed animals. She’s grown accustomed to his manic obsession with trifling, funny things– and some might say he’s even starting to rub off on her (if there was anyone around to say it). She would promptly disagree… although she fancies herself an amateur witch, and she secretly loves that her dad’s store name includes a naughty word. ‘Smart-Butt Tees,’ she can often be heard snickering with her friends online.

She enjoyed the cheekiness of that original name SO MUCH, in fact, that David felt he should scratch it and change it to the donkey’s real name… ALEC! So that’s what he did, and now their venture has a cleaner (but still cheeky) identity with which to approach a more family-friendly audience. Perfect.

“We should really start selling some of this stuff, Daddy.”

“Hmm…” David knows she’s right, of course, but he just can’t bring the creative process to a halt. Thinking– tinkering and designing, writing and reading– is what he’s always done best. He looks up at Syd now, who is staring back at him and hugging the pink plush pig she’s had since she was born.

“HMM…” she mimics sarcastically. “Yes, hmm… and we may just have to visit the human world to make that happen, don’t you think?” 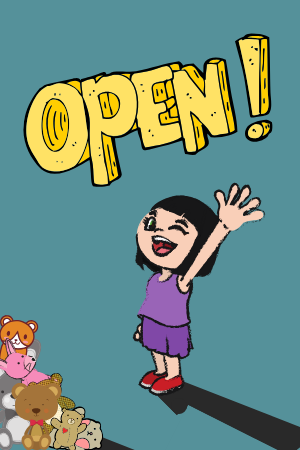 David rolls his eyes and laughs. He stands up for what seems like the first time in months; his knees crack like old farmhouse floors, and he lets out a moan as he lumbers across the great and scattered workshop.

They both crank their heads around to catch a sudden chorus of bumps and buzzes; a huge OPEN sign on the wall flickers to life and countless fluorescent bulb-flashes ascend the tall, dusty elevator shaft behind them. David smiles, watching her face light up like Christmas morning.

“Yes, really.” He holds out his hand.

Sydney bolts around in a blur, laughing and gathering up her favourite things into a backpack. Ms. Piggy tucked safely under her arm (with a makeup case and a pair of high heels) she takes one last look around the main floor– noting new bursts of colour here and there in the light– and then reaches up to take his hand.

“It’s only just begun.” He leads her into the open elevator and closes the door behind them. “But you’re damn right, Honey Bee… it has been an absolute blast!”

So it is written: the gospel of Smart Alec Tees. And so shall it henceforth be told; the origin story, so to speak, of our little graphic tee revelation. In the name of the Father, the Daughter and the Holy Moley. Amen.

To bear witness, visit the church of SMART ALEC TEES. Or learn more about DAVID POTTS— the founder and creator. GET IN TOUCH anytime too… we’d love to hear from you!